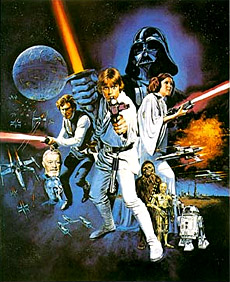 Sitting here watching Star Wars Episode I on tv. I’m a big star wars fan. I remember one Christmas when I was a kid my older brother and I got just about every star wars figure conceivable. I was really excited when I first heard that they were filming the prequel and completing the saga. However, in retrospect, the original movies are still better than the newer ones.

Here’s why I see it that way:
1. In the original series of movies, Star Wars had excellent acting – Harrison Ford, Carrie Fisher, Alec Guinness, Mark Hamill (probably the weakest of the lot) and the voices of James Earl Jones and Frank Oz (yoda). They really sold it. You believed what they were saying and doing. It had a lot of layers and depth. With Portman, Hayden Christensen and Ewan McGregor, so much of their dialogue seemed forced and stiff. You just had a hard time believing them. The one exception was probably Liam Neeson, but his character was unfortunately killed in Episode I. McGregor had a few good moments, too. Still, overall the acting was flat. And don’t get me started on some of unforgettable animated characters like Jar Jar Binks. You know that George Lucas had to be shaking his head over that one. Which leads me to my second point.

2. Too much reliance on CG (Computer Graphics)
– I would be interested to know what percentage of sequences in the new Star Wars were completely CG…it has to be a bunch. Don’t get me wrong…I love good CG and some of the CG in Star Wars is UNBELIEVABLE. Still, I felt that too much of the movie relied on CG as a crutch for poor acting too much of the time.