Well, I had seriously considered shutting down the blog, but I held off just because I thought there might be a remote chance I would want to blog later on.  This has always been a place where I’ve shared thoughts and ideas that are swimming in my head. So although it’s been a while, here’s the latest. 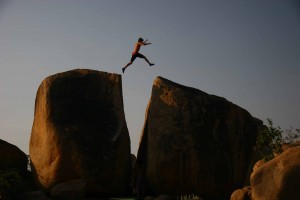 This morning I was reading through Hebrews 11:8-16.  Some would call it the “Hall of Faith” because it goes through several lives of people in the Bible that lived and took action “by faith”.  In fact, that phrase “by faith” appears 4 times in this short passage.

You can read the passage for yourself.  While I’m always struck by the amount of faith each person had and acted on, in my mind, Abraham’s always stands out: “By faith Abraham, when called to go to a place he would later receive as his inheritance, obeyed and went, even though he did not know where he was going.” (v8)

I thought about that some.  “What promise have I received, have we received, as believers in Jesus that would cause us to take such big steps of faith?”  It’s not the promise of a new land here on earth, although I guess for some it could be.  It is a promise of a “land” not of this earth in Heaven.  But while we’re still “here”, it’s the promise that He goes before you and will be with you (Deut. 31:8, Matt 28:20). From what I’ve experienced in my faith journey following Jesus, it means He is the constant companion.  It means He is working things for my good ultimately, and that in the event that I “step in it” so to say, He is big enough and even IN that mess, He is working THAT for my good and will guide me to make a course correction. (somebody help me preach this! 🙂 )

Faith remembers the promise, but focuses on what is forward.